This term in Geography Year 2 have been looking at Zambia with a specific focus on Mugurameno village, this is a village that is next to the Zambezi River that runs through Southern Africa. We have learnt lots of new facts about the country, including the languages spoken, the currency they use and what animals live there.

The children have really enjoyed comparing the new country to their own as well as the different ways in which the Zambezi River is used in comparison to the River Thames.

The highlight of learning about their new subject for all the children however appeared to be their Zambian food taste testing in which the tried 3 stable foods from Zambia:

1. Nshima – A porridge made from cornmeal and water.

2. Jollof rice – The children had a version of this made with tomatoes and different spices.

3. Plantain – The fruit was fried and served.

As you can see from their pictures some of us really enjoyed trying new things and some of us were not impressed! A lot of us found the Jollof rice very spicy and had to get ourselves a drink of water.

Overall, we are very proud of ourselves as each and every student tried something new and we now know a lot more about Zambia now! 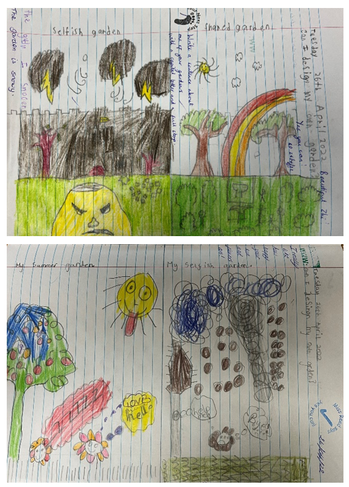 Since the start of the new term we have been looking at a new book in English written by Oscar Wilde called The Selfish Giant. In the book there is a beautiful garden that the children play in, but when the giant returns home to his garden and sends the children away the garden withers and changes.

Year 2 have used this book for lots of different tasks within English. The children have designed their own two gardens, one sharing and one selfish using different colours to represent both! We have challenged ourselves to use higher level imaginative language when describing our gardens as well as writing about what makes us really angry like the giant became in the story.

Since the start of this term we have been focusing on a new artist called Giuseppe Arcimboldo. Arcimboldo began by designing stain glass windows with his father, but over time began creating more abstract portraits. He created portraits around the seasons and elements painting flowers, acorns, leaves, sticks, candles and many more items.

The children have learnt a lot of facts about Arcimboldo and tried their hand at creating some artwork of their own. They have created water portraits using fish and sea creatures and air portraits using birds as their focus. 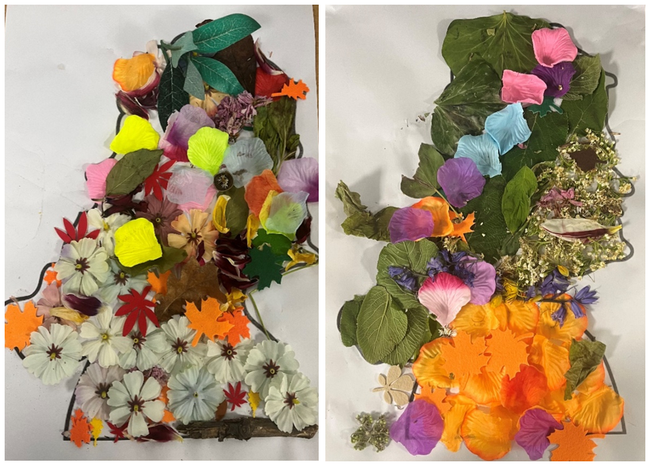 nce the children had completed this they set off on the school grounds to find resources to create a shared class portrait using flowers and leaves to reflect the season we are in now!

The children have really enjoyed being so creative and the freedom to work with different natural resources. We defiantly have some budding abstract artists in Year 2!

In English, Year 2 have been learning how to be persuasive. We started our week off by having some debates with one another around different topics, it’s safe to say some of us were quite passionate. We practised turn-taking and sharing your argument respectfully. At stages some of the children were having to persuade others about things they didn’t particularly enjoy themselves. 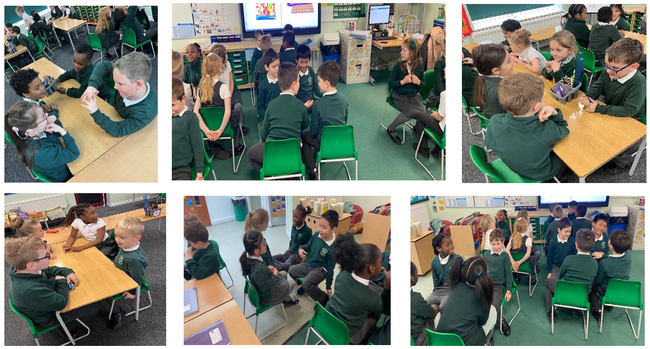 Year 2 have started a new book called The Boy Who Biked the World by Alistair Humphreys. In the story a school boy called Tom daydreams of traveling the world and finally decides to start planning his journey. We have been reading a chapter at a time, creating our ideas of places we would like to visit using the conjunction because, as well as a list of things that we will need to take with us.

We used Atlases to look at different countries around the world and see where they are and what they are famous for to help us choose where we would like to visit. We created our work using these ideas and then added little drawings just like Tom has in his journal!

For our list we discussed what would be wise to take on a trip as well as the fact that you cannot carry everything on a bicycle. Therefore, the children had to make logical choices of what to bring on their trip!

In Science we have been focusing on healthy living and in Design Technology we have been concentrating on what skills are needed to make a delicious pizza. These lessons led us to a fun filled day of making pizzas on Thursday 24th February. Our pizzas however had a twist, with one side being a ‘normal’ pizza, or the healthy side and the other being the unhealthy side with chocolate spread and sweet treats! All of the children had the chance to spread, cut, grate and taste their toppings as they put their pizza together. Finally, all of the children got to have a taste of both sides of their pizza while watching a film. We all learnt some new skills and voted on which side we preferred, with most of us enjoying the unhealthy side of our pizzas more!

We would also like to take the opportunity to thank all off the Year 2 parents so much for the amazing donations we received, it is really appreciated. With the left over sweets the children have been able to enjoy some extra treats while watching their films in golden time on Fridays and are very grateful. 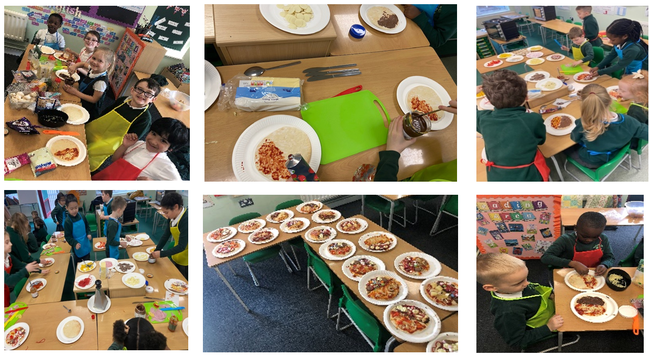 Year 2 have been focusing on a new topic in DT this year. We have been looking at structures and how to make sure they are steady, stable and strong. This term we have been building Rockets. We started by learning about the history of rocket travel and how they are made, then planned how to make our own. The building section was the part we enjoyed the most! We started by using a plastic bottle as a foundation for our rocket body, then we added noses, fins and some of us even added windows.

Once our building was complete we went to test out our rockets by seeing how far they could travel using a measuring tape. The best rocket builders from each class earnt themselves a prize of a brand new copy of Julia Donaldson’s The Smeds and The Smoos.

Well done to all of our children, your rockets look brilliant! 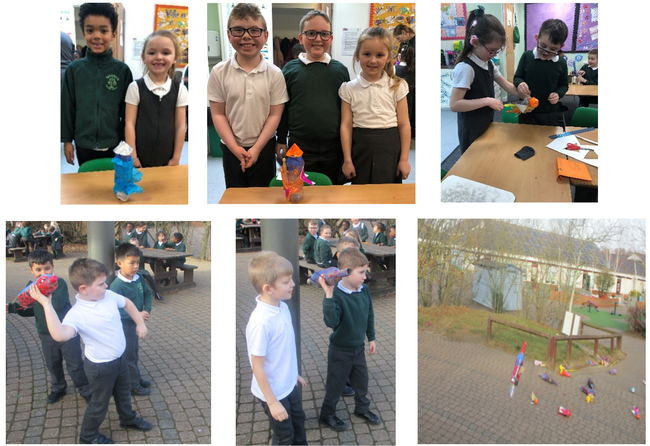 We also learnt about the Australian flag and what it represents and got the opportunity to colour our own. We had to make sure we were paying attention all day to pass the 8 question quiz! We also practiced drawing some Australian animals like the Koala and Kangaroo. To finish our day off we learnt how to say certain Australian slang words, while practicing our accents and learning the Australian national anthem! We had a lot of fun and really enjoyed finding out all about Australia’s history! 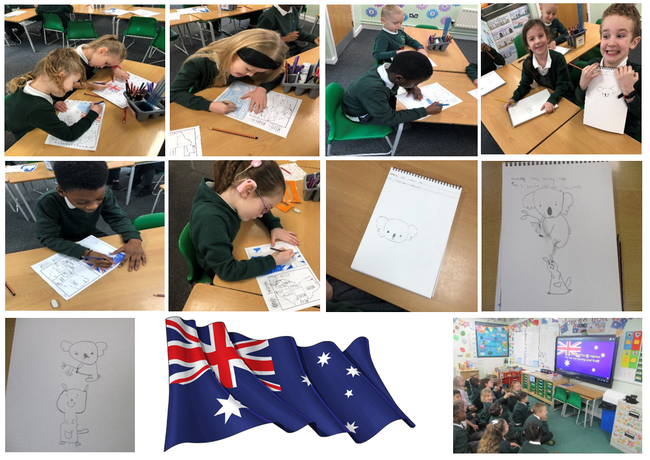 In English we have been learning all about postcards. The children began by looking at the features of a postcard and why we have them. Once they were sure what a postcard needed to include they started to plan their own. Our postcards however had a twist, because they were being sent from space! The children came up with some fantastic ideas about what they had seen and been doing on their space adventure including almost being dragged into a black hole and seeing the magical, colourful stars across the galaxy! They remembered to include Earth in their addresses to make sure they reached the right planet and enjoyed being able to use their imaginations to explore the solar system.

Year 2 have been enjoying getting into the festive Christmas spirit and have completed a number of fun-filled activities. The children took part in the school’s Santa Dash in which they enthusiastically ran as fast as they could dressed up in their Christmas outfits. Following this, they completed the PTFA sponsored selection box slide in which some children were wildly enthusiastic about sliding a coin across the room and seemed determined to injure Miss Dennis! Next up the children went to All Saints at The Beacon and showed off their beautiful singing voices. They also represented Warren well with their impeccable manners and wonderful behaviour. T The children have also recorded some Christmas singing for you to enjoy which has been uploaded to Teams.

Year 2 children went on a school trip to Vue Cinema, Lakeside to watch the film Abominable. For some children this was their first school outing ever and for others it was the first since the autumn term of Reception. All children were impeccably behaved on the day and did themselves and Warren as a school proud. We were fortunate enough to have the whole cinema room to ourselves and of course enjoyed our snacks whilst watching! The children will be using the plot of the film to aid their English work. 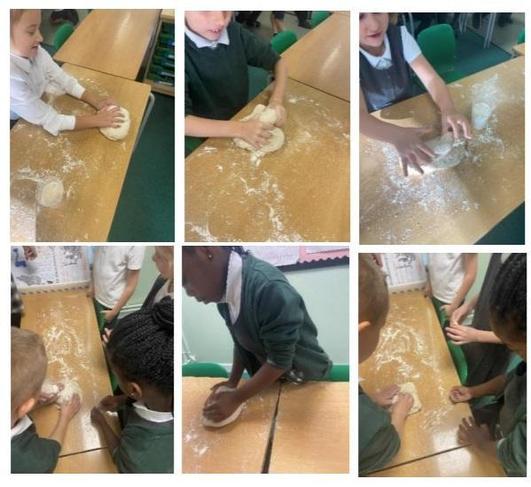 The children have been learning all about the tragic events of the Great Fire of London in 1666. They began the topic by baking bread just like Thomas Farriner ( though without any major disasters like Thomas thankfully!). They followed the instructions closely and produced perfect bread rolls to be proud of!